Rev matching is used when down-shifting to smooth the transition between gears and prevent shock loads through the transmission. It’s a useful skill for the road and track for both cars and motorcycles.

Each gear has an effective operating range of speeds which depend on the rev range of the engine. The faster the engine rotates, the quicker you can go up to the point when you need to change up a gear. Within the operational rotational speeds of the engine, there is a range of optimum efficiency known as the ‘power band’, and this is where the fastest acceleration can be obtained (see Diagram 1). 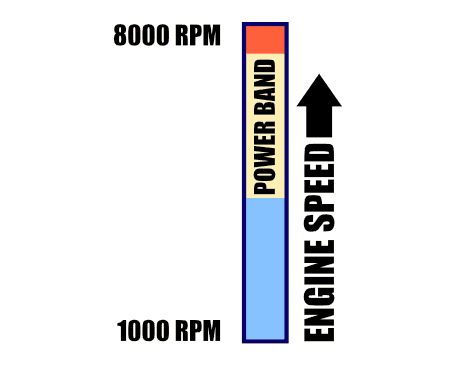 Diagram 1: The power band of an engine in any particular gear

Most gearboxes are designed so that when you change up a gear when accelerating, the next gear will be at or near the start of the engine’s power band (see Diagram 2). This design provides maximum acceleration all the way up to the top speed of the car. 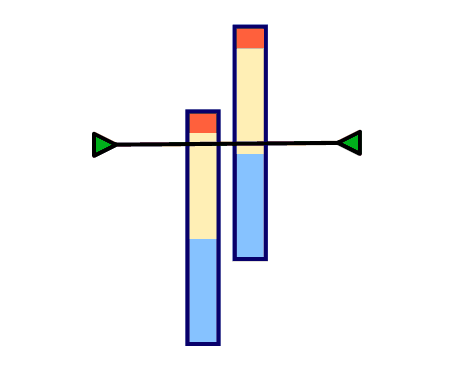 At most speeds, a selection of gears can be used (see Diagram 3). 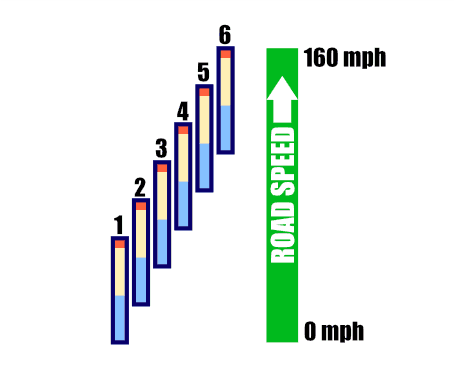 In the illustration above the driver could choose second, third or forth gear. In second gear the engine speed would be at the top of the power band, not leaving room for much useful acceleration until the rev limiter is activated. In forth the revs would be too low, leading to sluggish performance (but perhaps decent fuel economy). In third gear the engine would be at start of the power band providing maximum acceleration this would be the choice of the performance driver.

Lower gears provide greater acceleration due to the mechanical advantage of the gearing and the higher engine speeds. Therefore, when accelerating hold on the lower gears for as long as you can, but be careful not to hit the rev limiter as this only slows you down. Only change up when the engine has passed through the upper limits of the power band, not before.

When approaching a corner, you need to select a gear which will provide maximum acceleration at the exit, and this gear needs to be engaged before entering the corner. This means braking to the speed where you can safely turn into the bend, then shifting before turning in. Ideally you’ll need to select a gear which will cause the engine speed to increase to a sensible point within the power band so that plenty of power is available when accelerating out of the turn for that quick exit.

However if you select the correct gear and let out the clutch swiftly, three things will happen:

None of these are good when you’re trying to maintain control of a car driving near the limits of grip. Rev matching is the solution to these potential issues.

Rev matching is a technique which should be second nature if you want to be quick on the track and smooth on the road.

When is it used?

When changing down to create smooth, fast gear changes in a car with synchromesh. Almost all modern cars have synchromesh, if you don’t have it fitted you will need to ‘double de-clutch’ (you’ll know).

What rev matching does:

Note: On the track, the general rule is to use the brakes to slow down and the engine to accelerate. Engine braking is not efficient, and will not slow you down quickly enough for track use. If you have time to use engine braking, you’re not going as quickly as you could.

How to rev match when changing down

1. Rev matching is mostly used to change down in anticipation of a corner. Diagram 4 (below) illustrates a driver accelerating in third gear, approaching the top of the power band.

Diagram 4: Accelerating down a straight in third gear

2. As you approach a corner, brake until you have reached a safe speed to turn into the bend – engine speed will drop as road speed decreases. In Diagram 5 below the driver is in still in third gear, but is planning to select second for a quick exit. The engine speed has now dropped to the point where a change to second would be possible.

Diagram 5: Braking before a corner

3. While still on the straight, press the clutch in order to change down. This disengages the engine from the wheels and thus the engine speed starts to drop quickly. The desired gear is second, but Diagram 6 shows that at the current road speed, the engine revs will need to increase in order to mesh smoothly when releasing the clutch.

Diagram 6: Pressing the clutch in preparation to change down

4. Select a gear which will provide decent acceleration at the exit of the corner, in Diagram 7 the driver has selected second gear. Simultaneously use the throttle to increase the engine speed in order to match the revs in second gear to the road speed.

5. When you think the revs are at a suitable speed, release the clutch smoothly and progressively then turn in and start to accelerate out of the corner. If done well, there should be no jolt as the clutch is released (Diagram 8).

Diagram 8: Second gear is selected, engine revs match road speed and the clutch is let out.

6. Congratulations, you’ve learnt to rev match!  You don’t need to be 100% accurate when raising the engine revs, and you’ll improve dramatically with practice – try to make this a technique you use every time you drive. With time, you’ll instinctively know when the revs match the road speed and be able to rev match with a satisfying and rapid blip to the throttle. Now you’re ready to learn heel and toe shifting, which is rev matching while on the brakes.

Heel and toe is the art of changing down a gear and rev matching while braking, creating a lovely smooth process.
Read now

One of our most popular articles in on the art of rev matching, which is a skill which can be even more relevant for motorcycles than cars. This article is loosely aimed at track riders but is also relevant for…
Read now
We hope you enjoyed this article - it look a lot of time and effort to pull together. We don't ask for much, but would really appreciate it if you felt like sharing this post with anyone who might benefit from it. Use the sharing buttons on the left or bottom of the screen. If you're using an ad blocker you may need to temporarily unblock. Thanks for your support!