Racecraft: overtaking on a corner

A crucial part of racing is overtaking and defending your position – this is where things get seriously fun. This article builds on the fundamentals of the racing line, which are worth reading before you move onto this topic.

Now we know you’re a sensible human, but please note that this is a track only technique and is inherently risky. You would be nuts to do this on the public roads, and on the track

Once you’re familiar with the articles above it’s time to apply these principles techniques to racing. A common overtaking strategy is to dominate the inside line of the corner in an attempt to make your opponent run wide on an non-optimal line – this advantage can help you gain a position, but it can also be defended against. We’re going to learn about the offensive and defensive techniques.

Let’s quickly recap on the ideal racing line (shown below). If the track is clear you should be able to stick to this line and continue to put distance between yourself and competitors stuck in traffic behind, however a clear track doesn’t usually last for long and you’ll need to learn to continue to be fast with the distraction of other drivers. 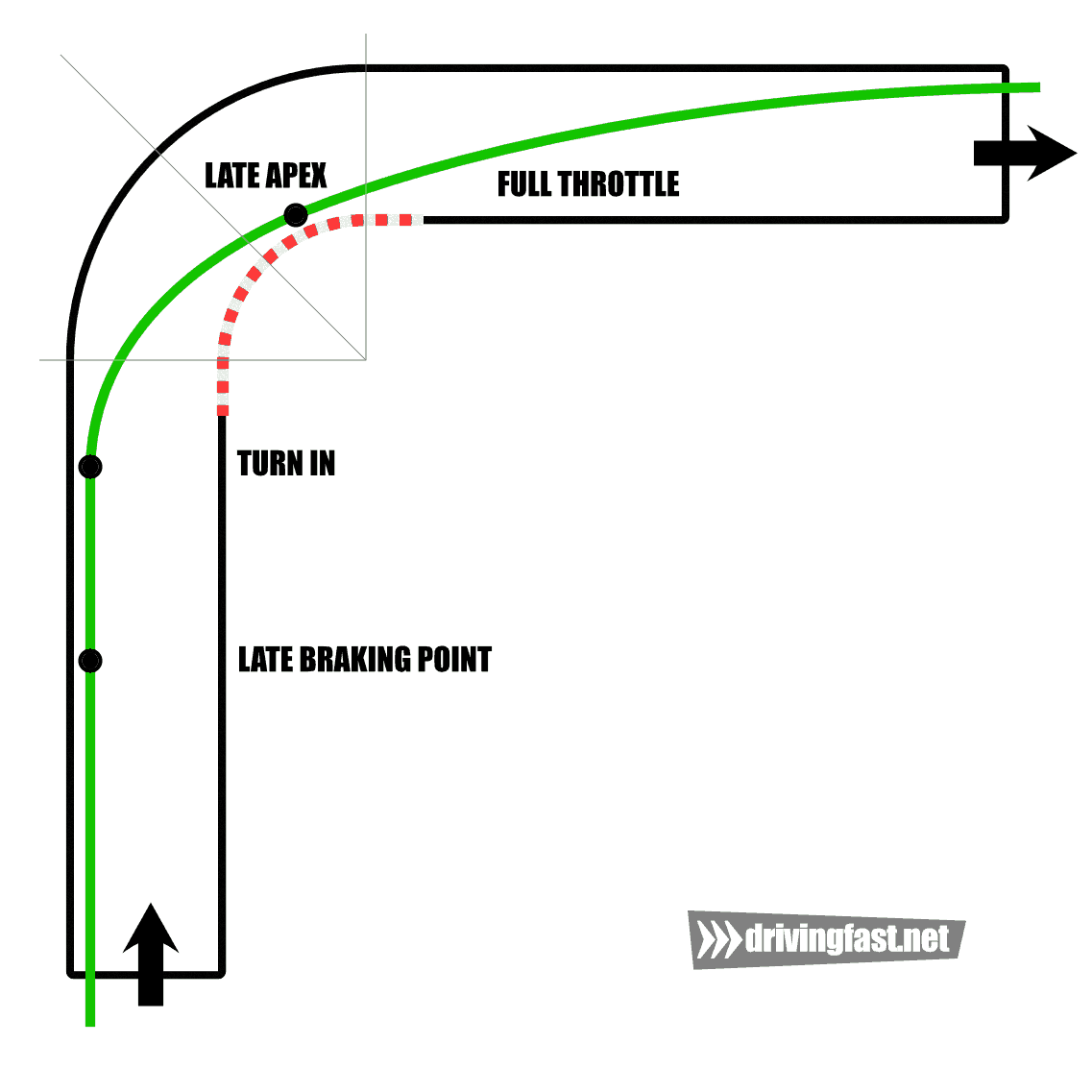 First, let’s tackle this scenario – you’ve been gaining ground the car ahead of you and you’re ready to try to overtake. He’s been rudely blocking you on the straights so you’re going to try and grab the inside line on a right hander to force your competitor to run wide on a slower line and claim your rightful place on the podium.

Now, the default behaviour of everyone on the track will be to drive the optimal racing line and by now you’ll understand how much slower it is when you don’t follow this path. You want to use this to your advantage – we’ll show you how in the steps below.

Step 1: Get in the slipstream

As you’re chasing the car in front, it’s worth exploiting the slipstream to use the bonus momentum just before the corner. Unless you’re in a more powerful car, this might be essential to aid the overtaking manoeuvre.

Step 2: Get a boost of acceleration

Pull out of the slip stream before your competitor brakes for the corner. Use the burst of acceleration to pull ahead and to the side of your competitor to the inside of the corner. This is the riskiest part of the exercise – you need to rely on the driver noticing you in the mirrors and not turning into the side of you resulting in crashing, flames etc. They will probably be annoyed so might do this anyway. If they do, you need to be on the ball and may need to abort the move by applying the brakes and moving back to your original position.

Now it’s a battle of inner strength – if you do manage to hold the inside line you will have naturally forced the guy in front to follow a wider (and slower arc) through the corner. You’ll be on a more natural racing line and should be able to continue passing and accelerate away. Remember to wave or use an obscene gesture, depending on your personality type. If they are really good, they can defend against this (discussed below).

Step 4: Prepare for the next corner

As we know, the ideal racing line depends on a number of factors, not least the position and proximity of the next corner. If we were writing this for a TV show, we would call it the two Ps of the racing line, then trademark it, then become millionaires, then elected president. But we’re not. We’re broke.

Anyway, if there is a long straight immediately after the corner, there’s a relatively strong change you can hold this position if you block your opponent. However, if you’re holding the inside line and the next corner is another right hander and it’s pretty close, you may well have screwed up. Probably should have mentioned this at the start.

And this brings us onto the topic of defending against overtaking on a corner.

Defending your position in corners

Remember, to gain position you have hogged the inside line, and you’ve probably taken an early apex to force your competitor wide. In other words you compromised your line for position, and if your opponent is wise they may be able to use this to their advantage and get you back.

An early apex means you’ll now need to run wide to maintain speed, sometimes very wide. And if you’re running very wide you may need to ease off the gas to not leave the track entirely. And if you’re easing of the gas early there is every chance you’ll lose position on the next corner. This is why racing is such a great sport – you have to make lots of rapid decisions some of which can be relatively catastrophic – sometimes you need to be brave, sometimes you need to be calm.

So let’s switch roles now. You are in the lead (naturally) and some pesky newcomer thinks they’re going to muscle through on a turn. But you are wise – you have read all of our articles on the racing line and probably donated large sums of cash to us as a thank you. You’re fundamentally a great person.

This guy has been on your tail for a while, his parents probably gave him his racing car for Christmas and it’s been to that tuning house you can’t afford. But you’re a champion. He attempts to push through on the inside but you don’t make it easy for him, forcing a very early apex. He gains position and tries to pull away from you but has to run a very compromised line. You apex later and have a more optimal exit gathering momentum more quickly.

If you’re smart, this loss of position will only be temporary – by gaining an advantageous line you will have a great exit speed which can be used to re-establish your lead either on the straight or the next corner – the battle continues!

The above scenario is outlined in the diagram below. 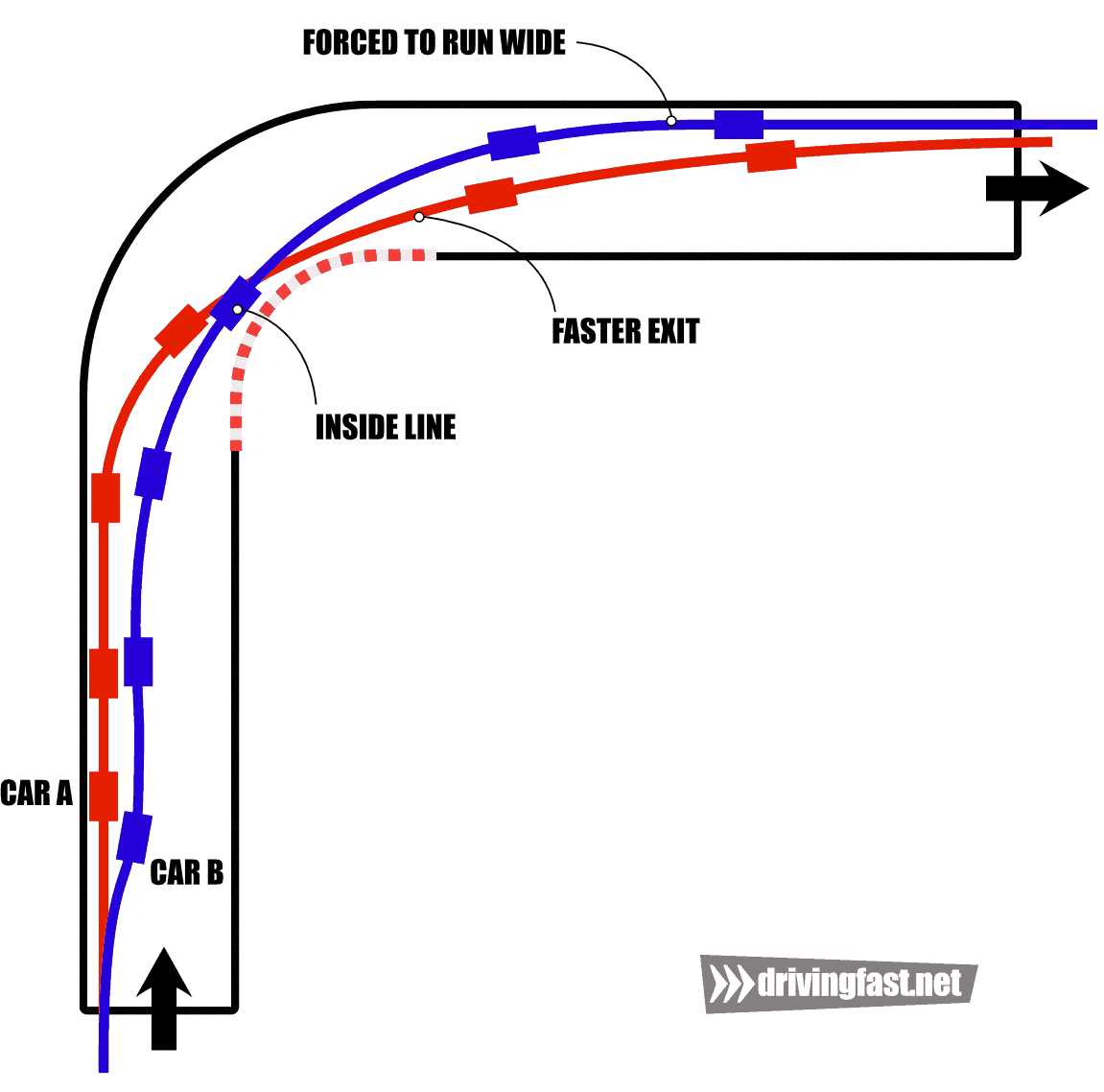 Picture this scenario - you're competing in a race series with identically powered cars and you'd like to pass someone on the straights - how do you do it?There are several techniques which could be used, and ideally combined. One…
Read now

A comprehensive resource on the racing line, this two part article will teach you how to recognise and drive any corner quickly. Let's get started!
Read now
We hope you enjoyed this article - it look a lot of time and effort to pull together. We don't ask for much, but would really appreciate it if you felt like sharing this post with anyone who might benefit from it. Use the sharing buttons on the left or bottom of the screen. If you're using an ad blocker you may need to temporarily unblock. Thanks for your support!