Getting a good start

Get off the line before anyone else and you’ll have an immediate advantage by being able to defend your position with the added bonus of having the ability to chose the ideal racing line. The technique is outlined below.

If you are able to choose the position of the car, consideration should be made to the traction of the tarmac. If you’re on the race track on a starting line, chances are there will be rubber on the track from previous cars spinning their wheels. In the dry, positioning your driven wheels over this rubber this provide more grip, however in the wet the reverse is true. Once you have set your start position, ensure your wheels are straight and this will help transfer as much power to the ground as possible.

Position the driven wheels on tyre marks in the dry 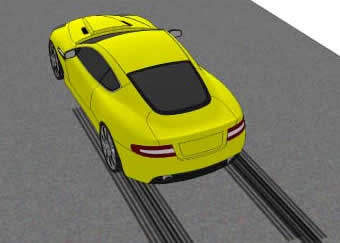 … but straddle tyre marks in the wet 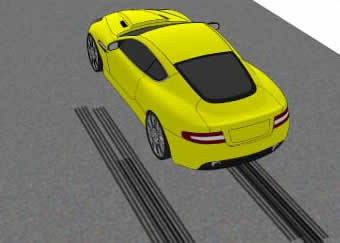 In a manual transmission car:

Set and hold the revs in your engine’s power band. If you’re familiar with the car you’ll know instinctively where this is, but when starting with a new car consider having a look at the power and torque curves. A Honda Civic Type-R has a very different power delivery to a Porsche 911 Turbo.

Note: Don’t ‘blip’ the throttle, as you won’t be able to accurately set the revs.

Never dump or ‘sidestep’ the clutch. This will result in a massive shock to the transmission, and almost certainly produce uncontrolled wheel-spin (less likely in a four wheel drive car). Instead, release the clutch progressively, and counter the drop in revs with a slight increase on the throttle. Limit the wheel-spin using a combination of clutch slip and throttle control, and try to fully release the clutch earlier rather than later.

In the wet, it can be a good strategy to pull off the line gently then gradually squeezing on the power, thus keeping wheel-spin to a minimum.

3. Squeeze on the power

When you’re off the line it’s still critical to keep throttle application progressive, especially in a powerful car or in the wet. Accelerating too hard can lead to ‘fish-tailing’ and prevents power from transferring to the track.

In a car with automatic transmission:

Use your left foot to keep the car stationary.

Use your right foot to push the throttle slightly, this will take up the slack in the gearbox and allow the revs to increase closer to he power band. Don’t do this for prolonged periods as it can lead to gearbox overheat.

3. Release the brake and increase the throttle

Come off the brake and increase the throttle quickly, but progressively. If you’ve left two black marks in the road you’re being to aggressive!

One thought on “Getting a good start”