Hybrid vehicles attempt to strike a balance between the more versatile combustion engine and the more economical electric motor. A number of different options exist, and this article attempts to simplify the technology and highlight the differences between modern hybrid systems.

[Sometimes known as parallel hybrid cars] If a car contains both a combustion engine and electric motor, it is unlikely that the electric power will be used as their dominant source of propulsion for high speed cruising. To gain maximum efficiency benefits, the challenge for designers is to ensure that the electric motor can contribute when the greatest benefits can be realised.

Fully integrated hybrids combine conventional engine and electric motor outputs into a single source. The electric element of the powertrain assists the engine when required but is not essential for progress to be made. The motor usually kicks in when pulling away or when an extra burst of acceleration is required. A ‘start-stop’ feature is usually employed on the main engine, and this allows maximum efficiency when driving in city conditions. Early hybrids were exclusively petrol due to the relatively quick and easy engine start associated with this fuel, but diesel hybrids are likely to become more common in future as this issue is tackled. Power is provided by a bank of batteries, which is recharged by making use of excess powertrain energy (such as when slowing down, coasting or braking). 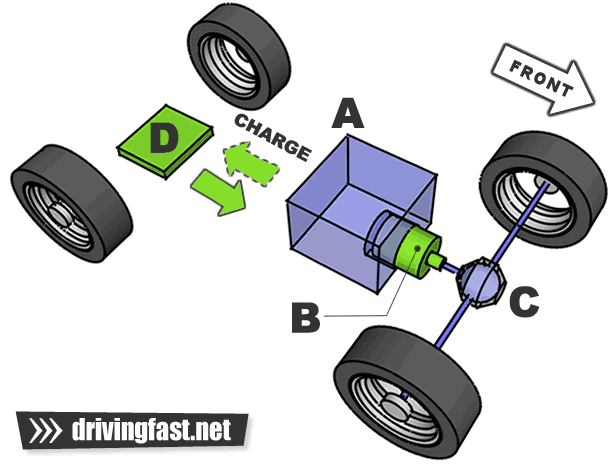 A. Petrol or diesel engine B. Integrated electric motor C. Differential D. Battery bank Integrated hybrid technology is often used for the more affordable end of the market due to the relative simplicity and user friendliness of these systems. Pioneers of the technology include Toyota and Honda.

The second natural method of creating a hybrid powertrain is to split the electric motor and the engine by axle. Hybrids with a dedicated electric axle have a number of potential layouts:

Advantages of the split layout include the ability to power all four wheels simultaneously, to reduce packaging complexity, and to use a larger engine / motor combination. Most hybrid supercars use this layout, usually with the engine driven wheels at the rear.

A. Petrol or diesel engine B. Differential, C. Electric motor (or dual motors in this case) D. Battery bank The dual motor technology shown as an example in Diagram 2 is more complex and expensive to produce, and is only likely to be realised in higher performance hybrids or electric vehicles. Some examples of the application of dual high performance electric motors are shown below.

A new generation of hybrid supercars are now emerging – a strategy primarily driven by tough new emissions legislation applied both to road cars and in racing. To satisfy the traditional sports car owner, most high-performance hybrids will maintain conventional power at the rear axle to deliver a sporty feel and top speed performance, so the natural use of the electric motor will be to contribute at the front. As the technology has advanced, the idea of hybrid sports cars has become more appealing due to the fact that electric motors have the benefit full torque available immediately. When applied correctly, this can help fill the flat spots in a conventional engine’s power curve and improve relative performance. The challenge for manufacturers is to overcome the weight disadvantages associated with the high output battery packs required for these products. Expect to see hybrid systems appearing in many more high-performance cars as the technology improves.

[Sometimes know as ‘series’ or range extended hybrid cars] Engine assisted hybrids vehicles use an electric motor as the sole source of drive, so these are essentially electric vehicles. However they address the range constraints of a typical electric car by using a more conventional combustion engine when required to recharge the batteries and extend the life of the batteries. The engine is never used to directly power the wheels, and this means it can operate in the most efficient conditions to maximise economy.

Regenerative braking is an energy recycling method used on most hybrid and electric cars. The idea is to convert the kinetic energy (which is usually lost as heat during braking) into usable electricity to recharge the battery pack. Energy is usually captured by using the main electric motor in reverse (as a generator), which is connected to the wheels automatically when braking is started. The Porsche GT3 hybrid uses a high speed flywheel to store captured braking energy, when is then released on demand to power the motors.