There are many different methods of inducing a drift, and your choice depends on the natural properties of your car. Once oversteer has been invoked, you’ll need to control the drift using the throttle and counter steering. To maintain an accurate line while going sideways is tricky, and will take lots of practice.

What kind of car do I need to drift?

You can’t drift properly in a front wheel drive car – you can oversteer temporarily, but it’s impossible to sustain a drift correctly without rear or four wheel drive.

Stages of the drift

We’ve split the drifting process into four main stages shown in Diagram 1 below. A. Turning in B. Inducing oversteer C. Controlling and sustaining the drift D. Exiting the drift 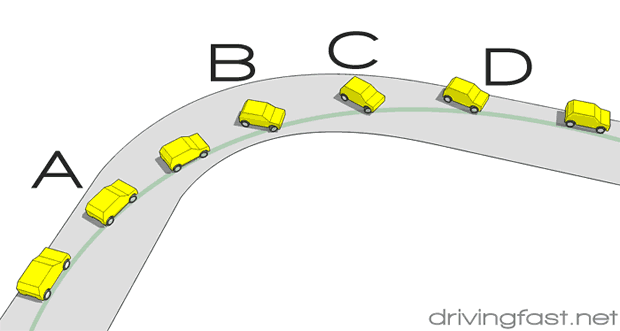 Diagram 1: The four stages of drifting

When learning to drift, our advice is to approach a tight 30mph turn in second gear at about 3000rpm – this will give you a decent amount of torque to keep the rear wheels spinning once you’ve induced oversteer. Remember drifting is not the fastest way round a corner so you’re not trying to set speed records here. Turn in and aim to apex about half way round at the geometric apex (the green line in Diagram 1 above). If apex too soon you can find that the car will run wide and you’ll have to compensate by ending the drift early, too late and you’ll be on the straight early and won’t have any time to sustain the drift. With practice you’ll be able to drift round the corner in a smooth arc which follows the racing line. Once you have mastered drifting along the racing line, you’ll then be able to start the drift earlier and sustain it for the entire corner, and even adjust the angle or steering simply by adjusting the throttle.

B. Inducing the drift

At the apex of the corner you need to initiate oversteer, which sometimes is more difficult than it sounds. Drifting has developed its own unique terminology for techniques to ‘get the back out’ which are explained below. Remember that if you have a modern car with clever electronic stability control systems you’ll need to turn these off first.?

If you have a powerful car it should be possible to break traction simply by accelerating sharply mid bend – this is the preferred method of inducing oversteer as it is easy to control and repeat. If you increase the throttle too slowly it’s unlikely anything other than understeer will occur, too hard and the car may spin. You’re aiming for a sharp, sustained hit of power in the right gear – practice will help you get the balance right. You might be surprised about how much power is required on a road with a good surface, so it might be helpful to chose a road which is either damp or has lower traction tarmac.

Clutch kick is a useful technique to use if you do not have a particularly powerful rear wheel drive car. The trick here is to enter the corner and dip the clutch. Raise the engine revs to near the red line, and then release the clutch at the apex. The resulting shock load of torque sent through the driveline should break traction at the rear wheels, thus invoking oversteer.

“Shift lock” describes the action of locking the rear wheels momentarily by changing down a gear (or two) rapidly without rev matching. Once you’re back on the gas this will give you the benefits of more torque at the wheels due to the lower gear, with high revs helping sustain the drift.

Entering a corner fast, then lifting off the accelerator at the apex can cause oversteer due to the resulting forward weight transfer which reduces grip at the rear tyres. If you drive a particularly stubborn car, a quick dab on the brakes may help.

If your car refuses to get tail happy, there is always the option of the handbrake / emergency brake. A sudden sharp application and release mid corner will break traction at the rear wheels, but remember to keep your thumb on the release button! Get on the throttle as soon as the back steps out.

Flicking the car the opposite direction to the corner, just before turn in will generate a rapid lateral weight transfer which can unsettle the car enough to flick the back out. As soon as you turn in, get on the gas and prepare for the resulting oversteer.

This is probably one of the more risky methods – the trick here is to put two wheels onto the inside edge of the track while cornering, with the resulting bump unsettling car enough to break traction at the rear. Use with caution!

Most of the above methods can be used in combination (for example a ‘Scandinavian flick’ combined with ‘lift off’), but you’ll need to experiment with your own car to see which work best.

C. Controlling and sustaining the drift

Once the back starts to come round you need to act quickly. Keep the power on (you might be surprised how much power is required to sustain the drift), quickly counter-steer in the desired direction of travel, and balance the throttle to alter the attitude of the car. If the car is rotating too far ease off the gas then reapply as necessary.

To sustain the drift you need to keep the power on to keep the rear wheels spinning – about 80% throttle is the rule of thumb (although you’ll need less in slippery or low traction conditions). If the back comes round too far, gently ease off the throttle and apply additional steering lock to correct the slide. If you’re finding it hard to keep the slide going, you may need to use more power or take the corner slightly faster.

Diagram 2: Sustaining and ending the drift

Finishing the drift and getting the car straight again can be tricky – if you end the drift too quickly you might find the car starts to oversteer in the opposite direction, leading to ‘fishtailing’ and a pendulum effect which can be hard to control. The trick is to ease off the power smoothly and turn the steering rapidly and decisively back to the straight ahead position. Don’t let the steering run through your hands as this won’t give you the control you need.

If you decide to get serious and have a car specially for drifting, you should consider a series of relatively simple modifications.

It’s a good idea to try and reduce body roll and thus increase control due to a more consistent tyre contact patch by fitting stiffer springs and dampers. Adjustable ride height and damping will allow you to tune the suspension to your personal tastes. Fit stiffer anti-roll (sway) bars particularly at the back, which should be stiffer than the front to provide a good turn-in and reduce understeer. And if you’re feeling really keen, a few degrees of negative camber on the front wheels will further reduce understeer and give you a nice sharp steering response.

As drift cars tend to put the engine under high load and the angles they are driven at prevent an efficient flow of air through the radiators it’s sensible to fit cooling upgrades for radiator and oil. A limited slip differential with a decent amount of lock up torque is preferred, but budget racers may opt for a welded diff, which shouldn’t be used on the road. Clutch upgrades are also a good idea, especially if you’re using the ‘clutch kick’ approach to inducing oversteer. Electronic traction aids should be completely disabled, which may involve the removal of a fuse in cars with over protective systems.

Slick rear tyres or tyres with low tread are ideal for drifting. Rear pressures can be increased if you’re finding it difficult to get the back out. The best drift tyres have a stiff sidewall which reduces deformation under heavy load and gives a more predictable drift.

The tightest corners and hairpins usually require the use of a handbrake turn, but the flick can be used in conjunction with, or without the handbrake. The name arose from the Finnish and Swedish rally racers of the 1960s who…
Read now

Oversteer is related to understeer and occurs when the rear tyres reach the limit of adhesion in a corner before the front while cornering. Learn how to control it here.
Read now
We hope you enjoyed this article - it look a lot of time and effort to pull together. We don't ask for much, but would really appreciate it if you felt like sharing this post with anyone who might benefit from it. Use the sharing buttons on the left or bottom of the screen. If you're using an ad blocker you may need to temporarily unblock. Thanks for your support!

2 thoughts on “How to drift”