Spinning wheels are most likely to result from cornering while on the gas, pulling away from a stand still or accelerating in a car with lots of power Now a little more depth…

Before understanding why a limited slip or locking differentials are important, first we’ll briefly need to touch on why we need a differential in the first place. In simple terms, a differential is a device which allows for the differences in wheel speed which naturally occurs when a car turns a corner. As you can see in Diagram 1, the inside and outside wheels of a car turn in different radius corners, and thus need to rotate at different speeds (with the outside wheels travelling faster). However at least two of the wheels will also need to be linked to allow the car to be two wheel drive. Consider a front wheel drive car with the two front wheels linked together with no flexibility, such as with a solid axle between them.

Diagram 1: Cornering with a front differential

In this case a certain amount of tension would build up when cornering as the outside wheel tries to rotate quicker that the inside wheel (due to the bigger arc it must go through). Eventually this tension would relive itself with a wheel skipping over the surface, or with a drive shaft snapping. This situation is obviously not a good one, so differentials where invented (see Diagram 2).

As you can see, a differential is essentially a combination of cogs which work together to turn the wheels. It looks complicated, but it uses simple mechanics to allow the two wheels to rotate at different rates.

Diagram 2: A close up of a differential

How a differential works:

The drive from the engine rotates the large yellow crown wheel (1), which is attached to the smaller blue cogs (2). These planetary gears can rotate freely, but work together to turn the green side gears, which are connected to the half shafts (3). If one wheel needs to rotate faster than the other, the green cogs permit this to happen. Simple really!

Differentials work by allowing a flexible distribution of drive between the wheels on an axle, which allows for the different rates of rotation while cornering. However this flexibility is also the differential’s weakness, as it will always allow drive to ‘escape’ via the easiest route. So if you are turning a corner while hard on the gas in a powerful car, you can find that the inside wheel starts spinning (due to the weight transfer leading to less grip), and you lose the ability to put power down on the road via the outside wheel. This isn’t good, especially if you’re trying to put in a good time on the track, and this is why the limited slip differential (LSD) was invented. The differentials shown in the diagrams above are known as ‘open’ diffs which means they have no mechanism to prevent this drive loss. The first LSDs connected the two half shafts together with a clutch pack allowing a limited amount of clutch slip between each side of the axle. This allowed for the relatively small differences in rotation while cornering, but prevented violent wheel-spin from just one of the wheels which could lead to loss of drive.

Today there are a variety of differentials which can reduce unwanted wheel-spin on one side of an axle, which is prevented using either viscous, mechanical, hydraulic and electronic systems. A simplified example of a clutch type LSD is illustrated in Diagram 4 below. Many race bred cars have LSDs fitted as standard, especially powerful front wheel drive cars which are more prone to wheel-spin while pulling out of a corner. 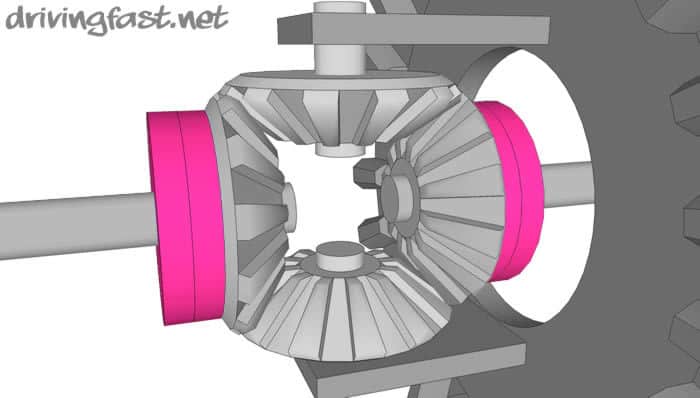 In Diagram 3 above, the simple open differential has been fitted with a clutch (1). This clutch prevents the two blue side gears from freely rotating independently which can help in the occasions when drive loss would be an issue, however there is enough flexibility in the system to allow small differences such as when cornering. Clutch packs such as these as usually held together by a spring, which automatically keeps the clutch tight even when it has worn down. The strength of the spring determines how aggressive the LSD becomes.

The three main varieties of four-wheel drive systems are:Permanent / full time four wheel driveManually selectable four wheel driveAutomatically selected four wheel driveThis article explains how each of these three systems work, and how to use them in the most…
Read now
We hope you enjoyed this article - it look a lot of time and effort to pull together. We don't ask for much, but would really appreciate it if you felt like sharing this post with anyone who might benefit from it. Use the sharing buttons on the left or bottom of the screen. If you're using an ad blocker you may need to temporarily unblock. Thanks for your support!