Question: “How much technique can there be to braking? Surely it’s just a matter of stamping on the pedal and coming to a halt?”

Answer: Good braking technique is a compromise between the two following factors:

If you would like to experiment with various different braking techniques, please do it on a track or on private land where nobody will be at risk of being run over.

ABS is a marvellous invention. By rapidly applying and releasing the brakes in pulses when wheel lock is detected, it allows you to both slow down and steer at the same time. All you have to do is hit the brakes hard and watch as you gracefully come to a halt. In cars with ABS many of the techniques listed here will not be relevant (anything that mentions wheels locking), but many racing cars are not equipped with ABS technology so manual braking techniques are still useful for the track. ABS was first introduced in cars in 1978, and the technology now is far more advanced than when initially launched. For many years it was possible to slow down faster using manual braking techniques, and traditionally racing drivers have preferred to brake manually. Conventional racing wisdom tends even to suggest that ABS is not the most efficient method of braking. Today, however, in many real world conditions ABS both prevents wheels from locking and also slows you down quicker than any manual braking technique, especially on wet or slippery roads.

What is the fastest method of slowing down in ideal conditions?

The following list shows the quickest methods for an experienced driver to slow down in high grip conditions such as a dry racing track. Threshold braking in the wet is much more difficult, and in this case ABS may well be the quickest method. 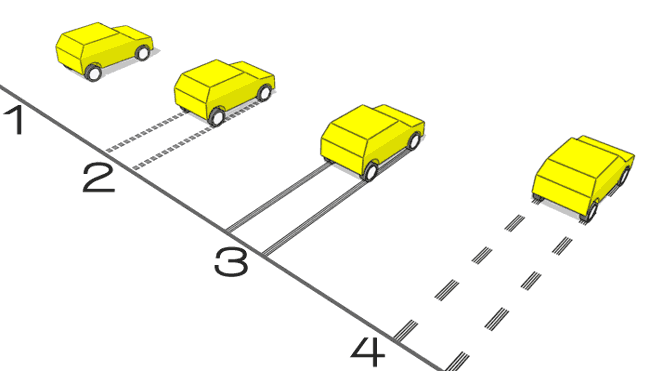 Just because a braking technique is not the quickest to bring you to a halt doesn’t mean that it should be avoided – cornering ability while braking also needs to be considered. Locked wheels do not permit steering so this is only an option when you have a clear straight line ahead of you, however ABS equipped cars and the cadence braking technique both allow you to steer at the same time.

Which is the best technique for slowing down?

This depends on what you are trying to achieve. On the track drivers should usually aim for threshold braking, however even the best drivers in the world occasionally lock up wheels, and it is at this point the decision needs to be made whether to use cadence braking (if ABS isn’t fitted), or reattempt threshold braking using slightly less pressure. In general, locked wheel braking should be avoided where possible, as it does not allow steering control to be maintained. Note: In some particularly challenging, low friction braking conditions it can sometimes be beneficial to lock wheels, discussed towards the end of this article.

Threshold braking is the best strategy to adopt to gain maximum braking performance on tarmac. The point of maximum braking performance is found before the point of wheel lock, and when using threshold braking the driver attempts to try and keep the braking pressure just before this point. Practically, it’s often very difficult to know exactly the point at which wheels will lock as many factors are at play such as tarmac conditions, tyre choice and brake temperature.

The graph below explains the science behind threshold braking in a little more depth. The process of locking a wheel does not occur all in one go, and varying amounts of wheel slip can occur until the wheel rotation stops (100% wheel slip). Maximum braking performance occurs at about 20% wheel slip, but as you can see from the graph this only drops about 30% when the wheels are fully locked. So the main points are that the best braking performance in any vehicle occurs before the point of wheel lock, however locked wheel braking is a lot better than nothing. 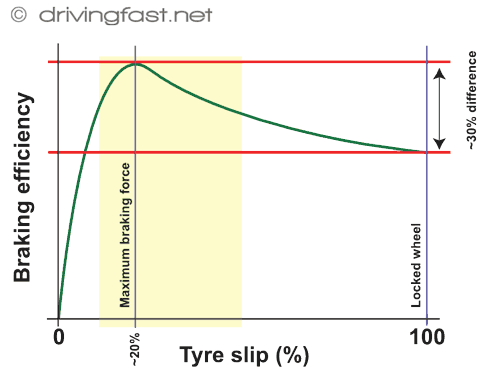 So, unless you’re a professional racing driver, the best strategy to adopt is to best to brake hard, and if you find some wheels are locking, slightly releasing the brakes and then reapplying with a bit less pressure. As you learn how your car behaves in these conditions you’ll get better at judging the pressure needed for maximum deceleration.

If you are the proud owner of a modern sports car, it’s likely that the engineers have spend countless hours fine tuning the ABS to provide the best possible performance from the hardware. Modern ABS systems are now so good that unless you’re a very good driver it can be hard to slow down more efficiently that by using the system. Even if ABS is fitted and it performs well, it is still better to threshold brake and prevent the system coming into operation in the first place. ABS is reactive and as the old adage goes – prevention is better than cure.

Ok, so locked wheels aren’t quite as good at slowing you down as the threshold braking technique. However there are certain situations when it’s very difficult to maintain hard braking without locking wheels, such as on a wet road or track. In this case, sustained wheel lock might not be as bad as you might think. As long as you are heading in the right direction locked wheels will slow you down effectively, but remember that you’ll be unable to steer. Which leads us onto the next technique?.

“So, I’m on an icy road, going too fast (I’m sorry, but it’s a bit late for that now!), I’ve slammed on the brakes, and now I’m hurtling towards a tree!” Well, you’ve been silly, but all may not be lost. Keep the wheels locked for as long as possible to scrub off speed, and while you’re doing this, apply a small amount of steering lock (quarter of a turn is a good starting point). Now, release the brakes smoothly and you should find that steering starts to work again. This may be enough to get you round an obstacle. Keep applying and releasing the brakes at points where it is suitable, using small steering movements, or you’ll risk understeer or oversteer. This technique works equally well in good conditions at speed, but really should only be used as an emergency procedure.

Cadence braking is a braking technique for very low grip surfaces such as an icy road – essentially applying and releasing the brakes rhythmically in order to get a compromise between steering and braking performance. As you apply the brakes, the wheels will tend to lock up, slowing the car but preventing you from steering. As you release the brakes you regain steering control and can keep the car pointing in the right direction. Attempting to use cadence braking on a good grip surface at speed will result in weight transfers which can unsettle the car, possibly resulting in oversteer ? the last thing you need when trying to turn a corner. Not a technique to adopt for fast driving on high grip surfaces.

Trail braking is an advanced technique used when driving on the track in an attempt to improve lap times. We cover trail braking in our track cornering article.

If you go out to learn just one thing about your car, try to get to the point where you instinctively know what the stopping distance will be for different speeds at maximum braking effort. Quoting figures are mostly useless in real life situations, this is something that needs to be a split second decision, not a calculation.

The graph above show approximate braking distances in a standard road car in the dry. Source: Green, M. 2000. “How Long Does It Take to Stop?” Methodological Analysis of Driver Perception-Brake Times. Transportation Human Factors 2:3

This figure is marked in the graph above in red. As you can see it comes well under trend line for standard cars but this would be expected for a performance car that weighs as much as a small fish. This inconsistency nicely illustrates that fact that you need to get used to the braking performance of your car before you can start to push the limits.

Tyres have different breadths of capability. Dedicated slicks are good in the dry, but poor in other conditions. A general purpose tyre will perform well in many different conditions as shown in the graph below. Wet tarmac is less predictable than in the dry, however with the right tyres, good braking performance is possible. Remember to be very careful the first few times you approach a corner to re-calibrate your braking points.

In certain difficult braking conditions, studies have shown it can sometimes be beneficial for wheels to lock in order to aid the slowing of your car. An American study by the National Highway Traffic Safety Administration (NHTSA) found that ABS increased stopping distances on loose gravel by an average of 22 percent. A locked wheel allows a wedge of gravel to build up in front of the tyre, thus aiding braking. A similar issue can occur when driving in snow or in sandy condition, so remember to leave additional room if driving on these surfaces in a car fitted with ABS.

Threshold braking is the art of slowing down in the quickest possible way by maintaining brake force at the optimum level. It's tricky and requires a lot of practise in a familiar car before you'll be able to do it…
Read now

Trail braking is an advanced technique used to balance a car when entering a corner and to maintain as much grip as possible at the front wheels.
Read now
We hope you enjoyed this article - it look a lot of time and effort to pull together. We don't ask for much, but would really appreciate it if you felt like sharing this post with anyone who might benefit from it. Use the sharing buttons on the left or bottom of the screen. If you're using an ad blocker you may need to temporarily unblock. Thanks for your support!